Having trouble finding the Documents folder of the app you’re writing, then look no further.

If we look inside this folder we will find the Documents folder of the supplied app identifier.

There are many other things that xcrun simctl can do, such as creating and deleting Simulators, installing apps and photos plus much more. Great if you’re using a CI server and want to have a clean environment between runs.

After a quick Google I found a few great posts on the matter:

Writing a CPU emulator as a Dojo

At Unruly the developers have a passion for learning new things. We have many ways of accommodating these passions, including Gold Cards (which is our version of 20% time), fortnightly Tech Talks (5-10 minute lightning talks) and Dojos (hour long sessions on a given topic).

Developers can propose to run a single Dojo, or a series of Dojos, on a topic of their choosing. This allows anyone that’s interested an opportunity to learn something new or try a technology that another team is using.

We usually run a Dojo session every Wednesday at 12:00 during work time, which lasts for one hour.

Some of the topics we’ve covered already are:

I really wanted to learn more about how CPUs worked so I proposed to run a series of Dojos on writing a very simple CPU emulator.

I realised that the CPU should be very simple so we could all grasp what was going on and write some code within the hour. That ruled out modern CPUs, even 8bit ones, as they have lots of registers and opcodes.

For this reason I looked towards the CPUs of my video gaming youth and settled on the MOS 6502 which was used in many of the great computers of the time:

When running a Dojo it’s best if you can:

Introducing the parts of a CPU

The main reason I wanted to run the Dojo was to encourage myself to learn more about how CPUs worked and I thought others would find it interesting too. For that reason I’m pretty sure there are a few things which are incorrect, but in the end it’s not that important as the goal was a learning experiment and to provide an outline of how a CPU worked. 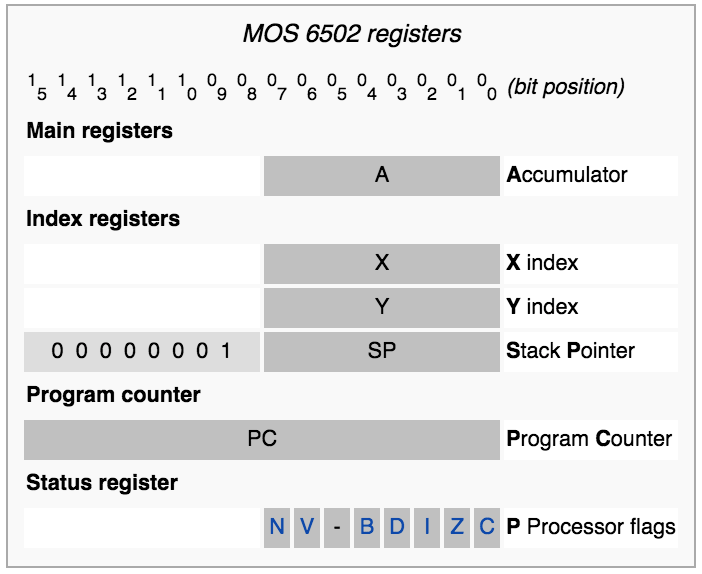 We were never going to build a real 6502 CPU emulator in a few hour long sessions so I came up with a cut down set of specs to work towards.

The fun part of running a Dojo is that everyone starts off together writing code against the same problem and as this was an abstract problem people were free to choose whatever programming language they wanted to use.

Most people settled on using either Java or Javascript to write the CPU emulator. What was interesting is that a few people test drove their implementation from the beginning which held them in good stead for future CPU Dojos. Those that didn’t even write tests soon realised that even when you’re hacking away at a small throw away hour long problem it is still very valuable to be test driving the code.

After the first session many people threw away their code and re-wrote it using TDD.

In the first Dojo we start by building an extremely simple CPU with a couple of registers, three opcode instructions and a 16 item size of memory. I’m using the term item as we aren’t restricting the memory to be byte sized at the moment.

The task set out is to:

In this Dojo we add more registers, some more opcodes for incrementing and decrementing register values and start delving into the exciting world of branching. I wrote a simple program which used a couple of registers and added branching to allow a section of code to be executed a number of times before continuing on with the rest of the program.

In the same vain as machines like the Commodore 64 we reserve a certain area of memory to be treated as video memory. Well in this Dojo I just wanted people to read back the values of that memory location as ASCII and tell me the song lyrics that were there.

Let’s make it easier to write more complicated applications. In this Dojo I introduce subroutines which allow us to write reusable functions.

To support subroutines we need to add a new register, the stack pointer, which will point to a memory address of where the current stack head is. By adding a stack to the CPU we can push the current program counter onto it when executing a subroutine and to pop it off again to jump back to where we left off.

To simplify things I suggested that we reserve the last x items of memory to be reserved for the stack.

I then rewrote the previous song lyric application using subroutines to see if people could get it to run on their updated CPU.

As we started to flesh out our CPU I thought it would be nice to be able to write code in a more human readable format, so in this Dojo we set out to write a simple assembler.

I then rewrote the song lyric application again but this time in our assembly language (modelled on the 6502 assembly language) and gave it to the developers to compile into machine code and then execute on their CPU. It included many subroutines and nested subroutine calls to ensure things weren’t that easy.

Example of part of the assembler, in this snippet we’re looping three times and jumping to other subrountines

That’s as far as we got with this particular topic. There are many things I wanted to do, including:

Example implementations from our Dojos

Here are some of the CPUs that people implemented in the Dojo sessions:

All of the example code and worksheets to run your own Dojos can be found on my GitHub page https://github.com/timpickles/cpu-dojo

Here are some useful links about the MOS 6502:

I hope that has wet your appetite to learn more about CPUs and perhaps run a Dojo within your team.

I want to start a new library in Javascript ES6 but also use it within our production ES5 code which uses RequireJS. I created a quick spike to see how straight forward this would be. Turns out it is very easy thanks to 6to5.

My goal was to create a simple RequireJS module which requires the ES6 transpiled module as a dependency.

The ES6 module uses some of the new ES6 language features, class, static, const and the simpler method definition. The module will export a class called Hello with a static function render() to add an H1 to the page. This will the be transpiled to a file named say-hello-es6.js.

The ES5 RequireJS module imports the ES6 transpiled module and calls the static function from the exported class via helloES6Module.Hello.render().

Integrating into a Grunt build process

Our project uses Grunt to build the codebase and again it was easy to integrate the transpiling of ES6 code into the build process.

The Grunt plugin grunt-6to5 makes it as simple as adding the following to the grunt.initConfig.

To transpile the ES6 module into an AMD module suitable for RequireJS set the modules option to 'amd'.

We use Mocha, Sinon and Chai for testing. Our unit tests are run either on the command line with node via PhantomJS or directly in a browser.

Some issues I think we’re going to have to work around include:

For further information on ES6 modules and the 6to5 transpiler see the following pages:

It's never too late to start a blog

It’s time for me to contribute some helpful snippets of code back to the community.